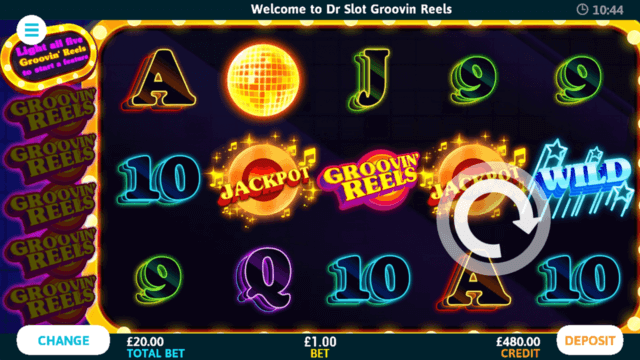 Enter your phone number and play on the go!

Enter your phone number and play on the go!

It’s time to get your flares on, blow dry your hair, and boogie on down to Groovin’ Reels online slots. DJ Dr Slot is laying down some slick tunes while you spin away on these 5×3 reels that feature AnyWays Wins.

The outrageous online slots of Groovin’ Reels have not one, not two, not even three or four, but FIVE fantastic features that you could activate!

To be the dancing Queen or King of this disco, you’ll need a mobile or tablet device that runs iOS 11 or Android 5.0 and above.

If you’re looking for a partner on the dancefloor, then take a look at our Refer a Friend offer where you could win up to £5, plus up to 50% of your friend’s first deposit amount – up to £100**! Or to start spinning right away, you can deposit credit quickly and safely with our Deposit by Phone Bill option.

*18+. Up to 50% deposit match received when the referred friend has played through their first deposit of £10. Bonus value decided by lobby game. Max Bonus £100. An additional bonus of up to £5 will be provided via lobby game when friend registers. 40x wagering requirement. 3 day expiry. £50 Max withdrawal from bonus win. Withdrawal of deposit excludes player. You can refer up to 6 friends every month. T&Cs apply. BeGambleAware.org

Before you can head down to the disco dancefloor of these reels, you will need to set your total bet. You can do this by tapping the ‘Change’ button in the bottom-left of your screen. As Groovin’ Reels features AnyWays Wins, your bet value will always be multiplied by 20.

The minimum you can bet per line is 1p and the maximum is £2.00, and this value can be adjusted using the ‘+’ and ‘-’ buttons. For example, if you decided to set your bet value as 10p, your total bet would be £2 per spin.

All wins pay from left to right and are multiplied by your chosen bet value. Any winnings will depend on the type of symbols spun in and how many appear on an AnyWays Win. To score a win, you’ll need to match at least three symbols on an AnyWays Win line.

So you don’t lose track of what’s what, visit the Paytable in the top left corner of the screen. Here, you can see what each symbol is valued at, along with seeing the features available and how to activate them.

You could be left starry-eyed if you land the Wild symbol on the reels! The Wild symbol can take the place of almost every other symbol – with the exception of the Groovin’ Reels symbol.

For example, if you were to spin in three Disco Ball symbols on an AnyWays Win, that’s already a groovy win. However, if there’s a Wild symbol also on the AnyWays Win, then you will be dancing for joy with an even bigger multiplier prize!

Although the Wild can help turn losing spins into winning ones, it cannot win you the progressive Mega Jackpot. To win that mega prize, you will have to spin in 5 Jackpot symbols on an AnyWays Win. However, spinning in a combination of Jackpot and Wild symbols could still win you a funky prize!

On Groovin’ Reels, there are a whopping FIVE different features you can play on! But first, to activate any one of them, you must spin in 5 Groovin’ Reels symbols on the reels. Don’t worry if you think this is too hard, we’ll give you a helping hand – or spin!

If you manage to land 3 or 4 Groovin’ Reels symbols on the reels, you’ll get another chance to make it to a feature. The Feature symbols will stick in place and the remaining reel, or reels, will spin to potentially get that 4th or 5th symbol you need.

For example, if you spin in 3 Groovin’ Reels symbols, those 3 reels will lock in place while the remaining two reels will automatically re-spin. If you land 1 more Feature symbol on the reels, this will remain stuck also, and the final reel will begin to spin and hopefully land you that all important 5th symbol!

If you manage to light up the reels with all 5 Groovin’ Reels symbols, you will be randomly selected one of the 5 fantastic features to play on!

If the lights stop on the Super Chic feature, you’ll receive 5 Free Spins on the Super Chic reels. We know why they’re chic by just looking at them, but what makes them so super? Well, these reels have added Wilds to help you bust out some pretty awesome prizes.

Get on your dancing shoes, it’s time for the Mega Disco if you light up this feature. You’ll be given 5 Free Spins where the reels not only will have extra Wilds added to them, but the 2 lowest value symbols will be removed too. That means these wins could be MEGA!

Yes sir, you can definitely boogie if you land on this feature. Along with getting 5 Free Spins, these reels have been ramped up to help you strike a pose and score a win. During your Ultra Boogie spins, extra Wilds will be added to the reels, low value symbols will be removed, and for an extra special prize, all wins will receive a x2 multiplier! That’s enough to make anyone dance for joy!

You could be recording some huge wins in the Studio Spins feature. At the start of this feature, the Groovin’ Reels symbols will transform into the Disco Ball symbol, but not only that, they’ll become sticky too! That means they’ll remain in place while all the reels begin to spin. If you land another Disco Ball onto the reels, that too will stick into place before the reels begin to spin again.

In this feature you could paint the town Red, or Blue, or even Green! That’s because in Roller Reels, you’ll need to pick one of those colours to begin. Once you have done so, the 5×3 reels that will be filled with different multiplier amounts will begin to light up Red, Blue or Green. All multipliers that feature your chosen colour will be added together to award you one groovy win.

When the Jackpot is won, it is reset and begins to rise again. Simultaneous wins can occur. If a player wins the progressive Mega Jackpot then a notification would occur BEFORE any other player was awarded the Jackpot. Any players in a game that contributes to that same Mega Jackpot will receive the on-screen notification of a reset the next time they press the spin button if it is within 10 minutes of the jackpot being won. Players will not be charged for the spin generating this notification.

In the event of a communication error after a progressive win result has been determined and before it has been displayed on screen, the win amount will automatically be transferred to the player’s account. While the game is live, the Jackpots cannot be terminated.

Groovin’ Reels online slots has a theoretical return to player of 94.00%. This is based on long term playback. System malfunctions void all payments. Monies are staked in the following order: winnings, player deposits, bonus credit.

Add Dr Slot to your home screen for easy access

Add us to Home Screen for best gaming experience.